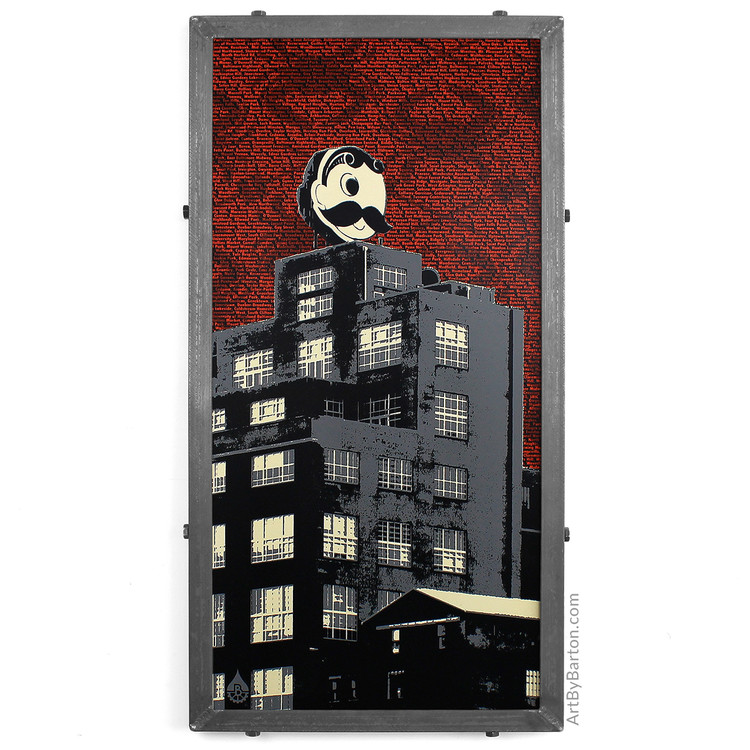 Materials: Acrylic on masonite; protected with a clear coat

National Bohemian Beer, informally known as “Natty Boh”, is an American Beer originally brewed in Baltimore, Maryland. National Brewing Company first crafted the beer in 1885, along with National Premium and Colt 45 malt liquor. National’s president, Jerold Hoffberger, also owned the Baltimore Orioles and Natty Boh was served at Memorial Stadium, thus increasing its popularity in the area. National Bohemian’s long running slogan “From the Land of Pleasant Living”, is an indication of the Chesapeake Bay, and resonates with those who call Baltimore their home. National Brewing Company is also responsible for inventing the six-pack in the 1940s. Approximately 90% of National Bohemian sales are in Baltimore, best enjoyed with old bay seasoned crabs.

The company’s mascot, the one-eyed, mustached man Mr. Boh, has been an infamous icon since his introduction in 1936. His image is licensed for many local Maryland companies and is the official team mascot of the Baltimore Boh’s professional soccer team. The Natty Boh Building, or, National Brewing Company Stock House, was completed in 1948 and is 116 feet tall, upon which is a neon sign of Mr. Boh keeping a watchful eye over the city. The unofficial King of Baltimore can be found in many shops across the city. His face can be found on a wide range of items such as tee-shirts and baseball caps to dog leashes and belts. Mr. Boh remains a symbol of friendship and good times to people in the proud city of Baltimore.

Positioned behind the infamous Natty Boh Tower are all of the Baltimore neighborhood names, arranged with coordinating Orioles colors, creating a trompe l'oeii of steamed blue crabs and mallets. My favorite beer during my years of college, and still today, was Natty Boh, which I always had to have when cracking open some hot crabs.  I wanted to handcraft this silkscreen print because crabs, Bohs, and O’s are a classic Baltimore combination, one that many Marylanders argue cannot be beat. I arranged the crabs and mallets to reproduce the effect of skulls and crossbones, a symbol connected to the tall ships of the Harbor in the Chesapeake Bay. Created with black and orange, the neighborhood names connect with everyone that lives and visits our iconic city. This limited edition print would make a great gift for those fueled by these Baltimore traditions.

Be among the first to hear about new work releases, featured events, news, and flash sales.

Have questions about our screen prints? Interested in a custom piece? We’d be happy to answer any of your questions. Just give us a call or send an email and we’ll get back to you shortly.